HS BASKETBALL: Pelosi’s 30 not enough for Old Forge in PIAA Class A loss 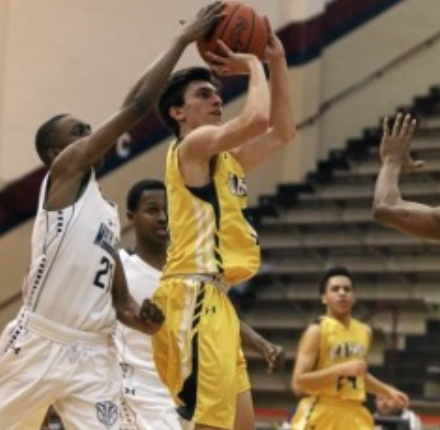 Old Forge’s Nick Pelosi has his shot blocked by Math, Civics and Sciences. Zahir Jackson in the second half of play at Bethlehem Liberty High School in Bethlehem on Tuesday, March 8, 2016. Jake Danna Stevens / Staff Photographer

For 32 minutes, he tried to carry his team on his slender shoulders.

The senior closed out his career in magnificent fashion by scoring 30 points, but the Blue Devils came up short in their second-round Class A PIAA playoff game Tuesday, falling to Math, Civics and Sciences Charter, 69-56, at Liberty High School.

â€œWe told him, you have wide-open shots, shoot them. He came out right out of the gates.â€

Pelosi buried a 3-pointer from the top of the key 90 seconds into the game, capping the first possession of the night.

When Pelosi scored off one of Ben Grochowskiâ€™s two steals, it was 5-0 and the Blue Devilsâ€™ faithful were rocking.

â€œItâ€™s a big confidence booster for us,â€ said Pelosi, who scored 19 in the first half and missed just two of his seven shots, including 4 of 5 from 3-point. â€œIt gets the crowd into it, the student section. Once one goes down, I see myself hitting two, three, keep it going and look for other guys.â€

Problem was, the Mighty Elephants were just that â€” too mighty.

It didnâ€™t take Malik Archer long to warm up. He finished with 31 points and scored 11 in the opening quarter when Math, Civics and Sciences opened a 17-10 lead before Pelosiâ€™s 3-pointer off a ball screen from Grochowski cut into the deficit.

â€œWe thought we were making some runs, but every time weâ€™d make a run, theyâ€™d answer right back,â€ Grochowski said. â€œIt was tough to get back in the game.â€

Down only, 23-21, with three minutes left in the half, Old Forge had a chance to tie, but Tymair Johnson made a steal, then went coast-to-coast with a rebound, the resulting consecutive three-point plays helping MCS to a 35-25 halftime edge.

â€œWe had the game, but turnovers killed us,â€ Yanniello said. â€œAnd in the end, they hit too many shots and went on too many runs.â€

Archer made sure of that. He scored 10 in the third quarter as the Mighty Elephants opened a 17-point lead. But Old Forge, with Grochowski powering to the basket, rallied.

â€œTheyâ€™re definitely bigger and tough, but I just have to match their physicality as best I can,â€ Grochowski said. â€œGo up strong. I donâ€™t care how much bigger they are. You have to play tough.

â€œI just kept going to the basket strong and tried to finish.â€

Grochowski scored seven of his 10 in the fourth quarter and also made three blocks, and when Eric Parker split two defenders for a layup with 55 seconds left, Old Forge trailed, 64-56.

Less than five seconds later, Math, Civics and Sciences countered with its sixth three-point play of the night to seal the win.

â€œThis group of kids, they had a really nice run. Itâ€™s a good year.â€

It was a sentiment echoed by Pelosi.

â€œWe started off the season 4-0, one of the best starts weâ€™ve had in the last three years, and we finished in the second round of the state playoffs,â€ Pelosi said. â€œI couldnâ€™t ask for a better group of guys to go on this journey with.â€Â  Contact the writer:Â  mmyers@timesshamrock.com @mmyersTT on Twitter