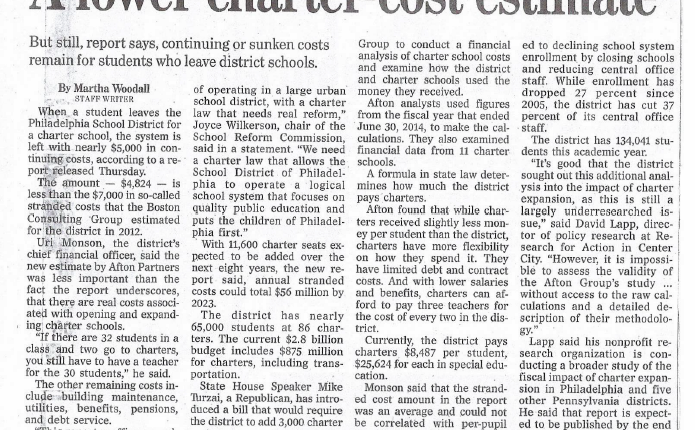 The following was posted in the Philadelphia Inquirer by Martha Woodall and can be found HERE;

Uri Monson, the district’s chief financial officer, said the new estimate by Afton Partners was less important than the fact the report underscores, that there are real costs associated with opening  and expanding charter schools.

“If there are 32 students in a class and two go to charters, you still have to have a teacher for the 30 students,” he said.

The other remaining costs include building maintenance, utilities, benefits, pensions, and debt service.

“This report reaffirms much of what we knew about stranded costs, and it highlights the complexities and constraints of operating in a large urban school district, with a charter law that needs real reform,” Joyce Wilkerson, chair of the School Reform Commission, said in a statement .  “We need a charter law that allows the School District of Philadelphia to operate a logical school system that focuses on quality public education and puts the children of Philadelphia first.”

With 11,600 charter seats expected to be added over the next eight years, the new report said, annual stranded costs could total $56 million by 2023.

The district has nearly 65,000 students at 86 charters. The current $2.8 billion budget includes $875 million for charters, including transportation.

State House Speaker Mike Turzai, a Republican,  has introduced a bill that would require the district to add 3,000 charter seats a year.

In February 2015, the SRC awarded a $157,500 contract to the Washington-based Afton Group to conduct a financial analysis of charter school costs and examine how the district and charter schools used the money they received.

Afton analysts used figures from the fiscal year that ended June 30, 2014, to make the calculations. They also examined financial data from 11 charter schools.

A formula in state law determines how much the district pays charters.

Afton found that while charters received slightly less money per student than the district, charters have more flexibility on how they spend it. They have limited debt and contract costs. And with lower salaries and benefits, charters can afford to pay three teachers for the cost of every two in the district.

Monson said that the stranded cost amount in the report was an average and could not be correlated with per-pupil spending.

The district has 134,041 students this academic year.

“It’s good that the district sought out this additional analysis into the impact of charter expansion, as this is still a largely underresearched issue,” said David Lapp, director of policy research at Research for Action in Center City. “However, it is impossible to assess the validity of the Afton Group’s study … without access to the raw calculations and a detailed description of their methodology.”

Lapp said his nonprofit research organization is conducting a broader study of the fiscal impact of charter expansion in Philadelphia and five other Pennsylvania districts. He said that report is expected to be published by the end of June.